The Studyard is surrounded by an impressive building complex with a castle built in the beginning of the 1700s. According to a map from 1756, the castle is one of the oldest buildings of the settlement, and its thick walls in the hallways remind us of the history.

The originally single-storey mansion was burned down by the troops of Napoleon arriving to Bábolna after the battle of Győr in 1809. It was the revenge because they couldn’t find any horses in the Stud as they had been rescued to the Bakony hills.

The building complex was renovated in the 1810s. The right wing of the castle is currently used as an office and continues with the stable of the stallions. Here you can see the pride of our Stud, the most beautiful horses of the purebred Arabian and Shagya-Arabian breeds. The stable continues with the Heroes’ Gate and then with the Chamber Hall with a reception area, which was converted from a stable in the 1980s. 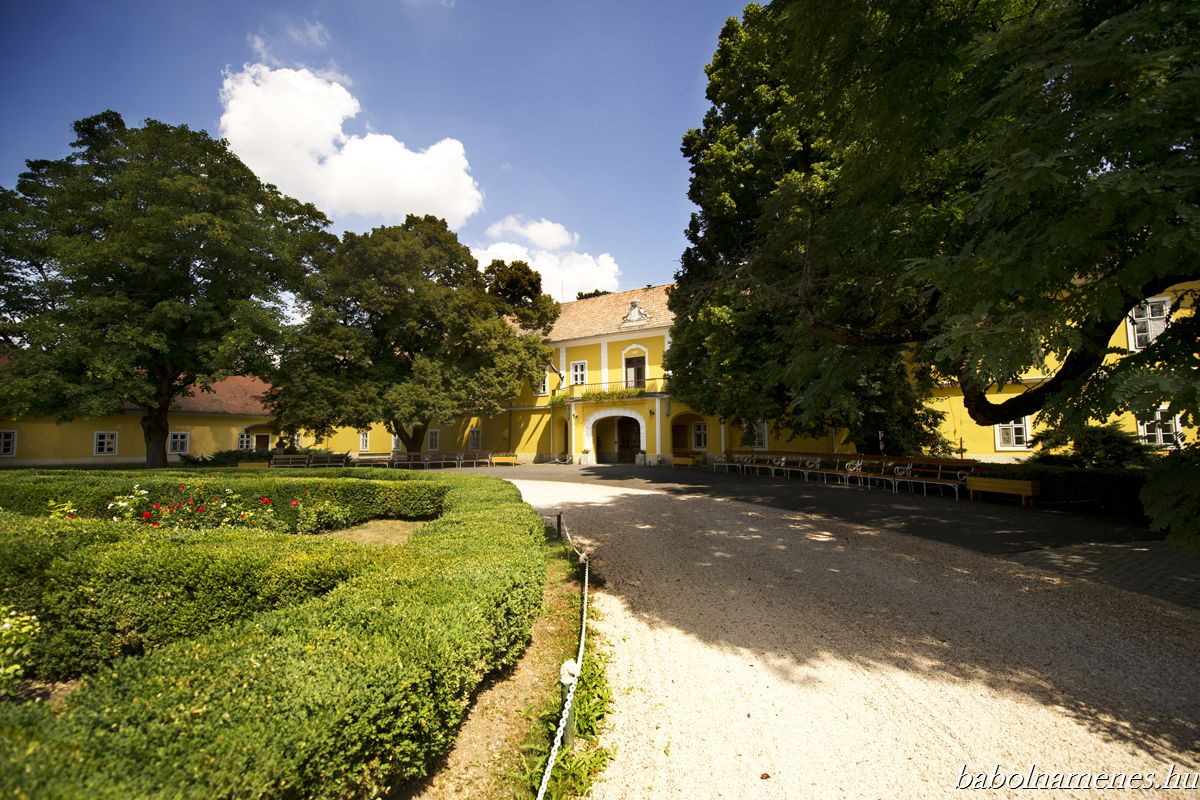 The magnificent, unique-patterned cassette ceiling of the Chamber Hall evokes the art of the Hungarian church paintings. Besides theater performances it is also suitable for major conferences.

You can find the stable of the riding and carriage horses, as well as the insemination room on the left side of the building complex, surrounding the beautiful Studyard decorated with flowers and fountains.

The statue of a saddled horse can be seen through the etched glass windows of the front door of the castle. The statue is a memorial for the “most faithful companion”, to the horse that came home without his rider from the battle of Győr in 1809, and reported that the battle was lost. And since György Vastagh jr.’s work embodies the ideal Shagya horse – a Shagya and a Gazal horse stood as models – it also dignifies the “Bábolna Arabian” breed.

In the Studyard three sculptural portraits are remindig us to the famous commanders of the Stud. You can find the portrait of the founder József Csekonics on the right side, and further off the penultimate commander’s, Tibor Pettkó-Szandtner’s bust. On the opposite side the portrait of the Syrian commander Mihály Fadlallah el Hedad and the memorial plaque of his favourite horse O’Bajan were placed in the shadow of the old acacia tree.

We may be proud of the old acacia planted in 1710, which is the oldest acacia tree in Central Europe. The old tree is now strengthened with steel parts, its diameter is 203 cm and its perimeter is 1275 cm. There is a marble plaque and a wooden headboard showing its age.

The Studyard is bordered with the stables of the mares and the stallions. The great era of the reconstructions was after the French invasion in 1809, in which the building complex was completed in 1860.

Especially the stallion stable is remarkable, as the magnificent purebred and Shagya-Arabian horses are placed in large boxes. The feeders are made of red limestone, satisfying luxury needs. The journalists of the old papers wrote it right that the horse aristocrats are living in Bábolna and Kisbér. 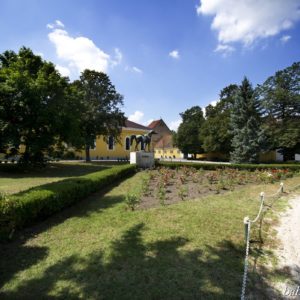 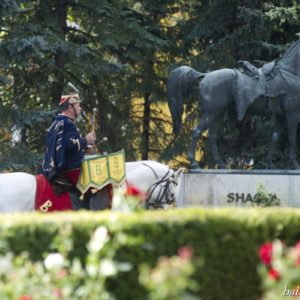 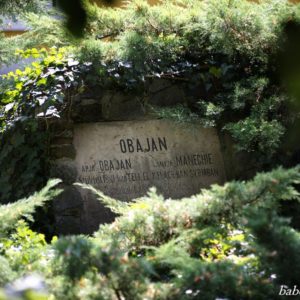 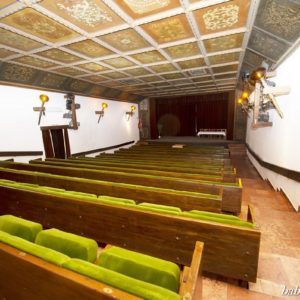 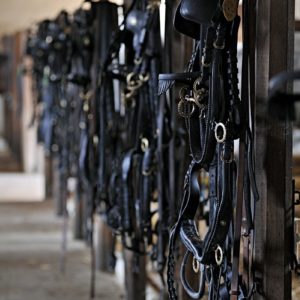 The yard’s view is defined by the Riding Hall, which impresses the visitors with its windows decorated with the former stud stamp, the artwork of the roof structure, the wrought iron chandeliers and wall-lamps.

The 15 m wide and 44 m long riding area is used for the daily work and horse shows. This is the place for training, where our horses get the knowledge that makes them a devoted companion. But not only horses are learning between the thick walls, also hundreds of riders have mastered here in the art of riding, which they demonstrate at shows and competitions.

However, one of the oldest riding halls in the country does not only offer opportunities for horse lovers, but it is also suitable for big events.

Between stable No. 2 and 5 the former main entrance of the Studyard, the Heroes’ Gate was built in 1938, in the time of commander Tibor Pettkó-Szandtner, and today is a symbol of Bábolna.

The marble plaques here are showing the name of those people from Bábolna who died in the wars of the last two centuries. It commemorates the heroes of the 1848-49 revolution and war, and the first and second world war. 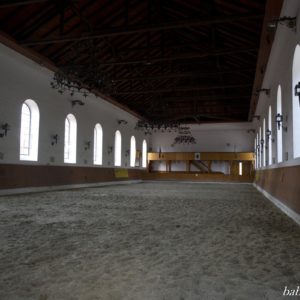 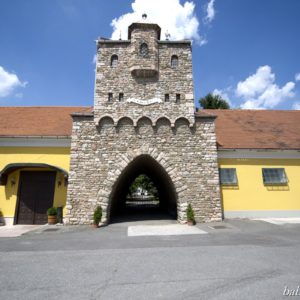 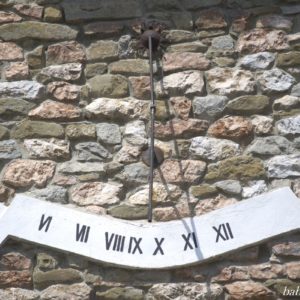 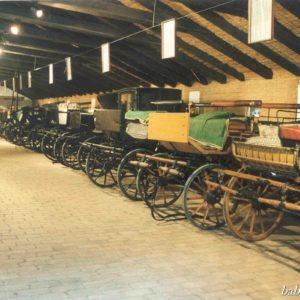 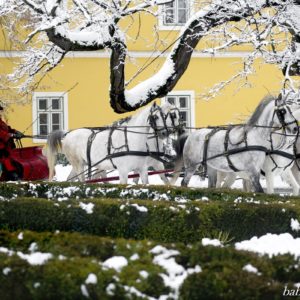 The collection of carriages and coaches are placed in the old remise next to the Riding Hall, where you can see 15 different type of carriages that guides to the history of driving.

Among the domestic coaches, the lightweight gentlemen’s carriage, the Károlyi, the Cziráky, the Esterházy (Cseklészi) and the Vásárhelyi carriage types can be found. Among the folk coaches, one of the simplest Dorozsmai and the more ornated Körösi carriages can be seen.

Some of the vehicles in the Coach Museum are still used nowadays for weddings, festivals, parades and governmental visits.

In addition to the various types of coaches, we can admire some ornated, Hungarian-style, handmade harnesses and special horseshoes.

The exhibition shows the history of the Stud over more than two hundred years in the building of the former Officers’ Casino. Documents, maps, sculptures and paintings, as well as tools related to horses tell us about the time since the Stud was founded in 1789, and how the people and horses lived here, who made the Stud famous with their actions and accomplishments, and got appreciation for the Stud at home and abroad.

The building itself is history, as the casino building was already a roadhouse in the Middle Ages. Today’s building was built in 1902 under the command of Mihály Fadlallah el Hedad, on the base of a Baroque-style building from 1756. It served the entertainment and cultural needs of the people living and working at the Stud. The soldiers and officers used the bigger and more elegant part, while the junior officers and craftsmen reveled in the other wing of the building. The middle part was a tavern for servants and grooms.

The casino building was rebuilt in 1996, and since then the Horsemuseum is in the right wing, and the Ötösfogat Restaurant is located in the left wing. In addition, a conference room for eighty people was also set up in the building. 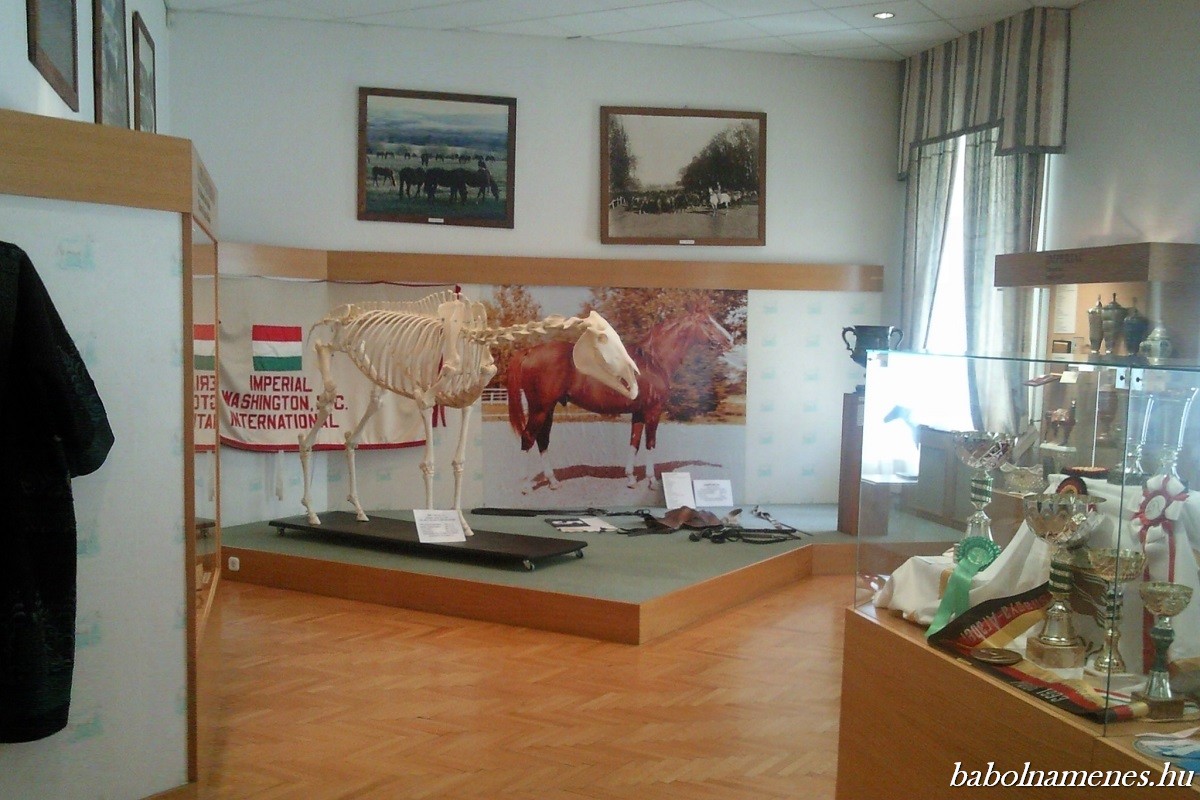